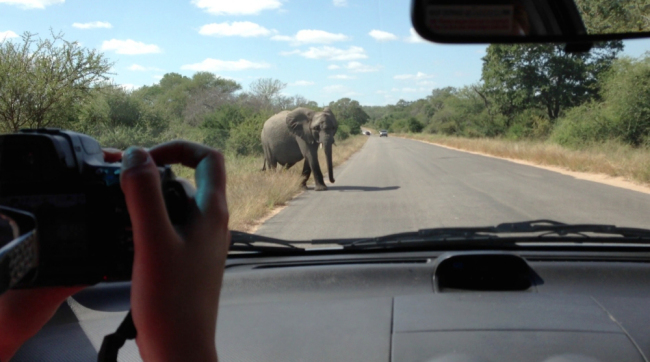 Metro.co.uk, July 1, 2013
by Paul McMillan
[youtube="https://www.youtube.com/watch?feature=player_embedded&v=0JeJGYf9s6w"]
It’s a relaxing drive in a safari park that turns into a terror ride.
A five-tonne male elephant smashes its way through the window of a car full of German tourists moments after fighting with another member of the herd.
The angry animal gores its way through a side window as the panicked passengers shout: ‘Go, go, go.’
The attack – in Kruger National Park, South Africa – was filmed by one of the tourists and the video found its way on to YouTube.
Before the terrifying scene, the passengers watched as a baby elephant in the herd stumbled on the road ahead before stopping to watch the two males fight.
Then, without warning, events take a turn for the worse.
The frightened tourists speed off in their hire car with shattered glass strewn over the back seat.
One passenger dryly remarks: ‘I think we lost the deposit.’
None of the men or women were seriously injured.