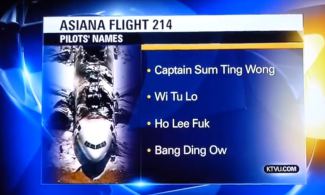 Metro.co.uk, July 14, 2013
by Paul McMillan
[youtube="https://www.youtube.com/watch?feature=player_embedded&v=sat3m3cj-u8"]
Asiana Airlines is considering legal action over a TV news report that broadcast four spoof names that it said were the pilot’s involved in the San Francisco plane crash.
The carrier said its reputation had been ‘badly damaged’ after the bogus names were read out on the city’s KTVU-TV, along with a graphic of the burned-out plane.
An news anchor kept a straight face as she read the names ‘Captain Sum Ting Wong’, ‘Wi Tu Lo’, ‘Bang Ding Ow’ and ‘Ho Le Fuk’.
Despite claiming the names had been confirmed by a National Transportation Safety Board official, the anchor later apologised for the station’s mistake.
The National Transportation Safety Board has also apologised, saying a summer intern erroneously confirmed the names of the flight crew.
Asiana is mulling unspecified legal measures against both KTVU-TV and the NTSB.
Neither the station nor the NTSB commented on where the names originated.
The four pilots, who underwent questioning by a US and South Korean joint investigation team, returned to South Korea on Saturday.
Asiana Airlines Flight 214 crashed on the runway at San Francisco International Airport on July 6, killing three and injuring dozens.