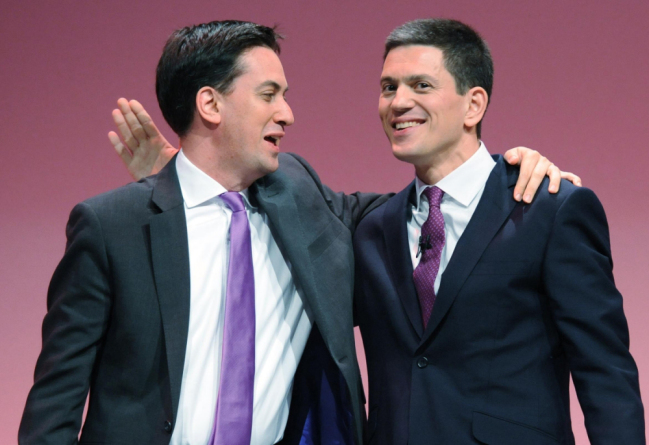 David Miliband said his relationship with his brother Ed is ‘healing’ after their bitter leadership battle and has urged the Labour party to try and win an overall majority at the next general election.
The former foreign secretary admitted he would ‘never erase’ the memory of his defeat in the 2010 contest but insisted there was no point ‘looking in the rear view mirror’.
Mr Miliband, who is moving to New York to lead the International Rescue Committee charity, said: ‘The truth is that these things, you can never erase them from memory or history.
‘But Ed and I are brothers for life. That is something that you value and that you nurture whatever the difficulty of the circumstances.’
Comparing his situation to the Wimbledon final, he told the BBC’s Andrew Marr Show on Sunday: ‘There are the Murrays of this world who win and there are the Djokovics who come second. You’ve got to be gracious when you don’t win.’
He also urged the Labour Party to reject the assumption that Britain was entering a period of coalitions and assume it could not win a majority in the next election.
‘I actually think that in the end the British people will take a view and I think that is a great prize for Labour, the danger is that could be a great prize for the Tories as well,’ he explained.
‘So I think, there is a bit too much mathematics going on in the way people are looking at the polls.
‘Remember the polls are meaningless at this stage because they start with the question: ‘How would you vote if there was an election tomorrow?
‘There isn’t an election tomorrow. People will come to a judgement about the future of the country in two years time, and I would say it is all to play for, it is open.
‘I don’t think anyone on either side should be banking on the fact that it is bound to be a coalition, I don’t see it that way.’
Meanwhile, Mr Miliband said the failure of military intervention in Iraq and Afghanistan had left the international community paralysed in the face of the bloodshed in Syria.
The overall reckoning in Iraq is ‘strongly negative’ and there would have been ‘no justification for war’ in 2003 if the government had known there were no weapons of mass destruction, he admitted.
Afghanistan could suffer many more years of civil conflict after western troops leave, he added.
But, delivering the Ditchley Lecture, he insisted that those experiences must not be allowed to hamper engagement with other crises.
‘While we have learned in the last decade that western military intervention can trigger chaos, so we have seen in Syria that its absence can mean mayhem – and it is going to get worse before it gets better,’ Mr Miliband said.